Transparency is the foremost thing that matters when playing at online casinos. Are the results fair? Are games not rigged? Mirax casino players can verify the fairness of game outcomes on their own using the Provably Fair system.

Fair games have made a breakthrough among players in Australia. With the help of this unique hashing algorithm, Aussies can check that results are unbiased just in a couple of clicks. Read our ultimate guide on how Provably Fair casino games work.

What Is a Provably Fair Algorithm?

The Provably Fair algorithm is a high-end cryptographic method that helps verify the fairness of outcomes in casino games. BGaming was the first software provider that introduced pokies and table games with the Fair feature.

In simple words, the Provably Fair system is used to confirm that game results are not affected by a player, a casino, or a third party. Fair games are the peculiarity of crypto casinos like Mirax.

The Provably Fair Bitcoin casino can be compared to a restaurant with an open kitchen. Visitors can see what happens backstage with their own eyes. Provably Fair gambling works similarly.

Beginners may think that it’s complicated to use the Provably Fair checker in online casinos. In fact, the workflow is quite simple if you know the basics.

The Provably Fair system is based on three elements:

A player receives an encrypted hash of a server seed before a game starts. As far as he gets a hash in advance, a casino can’t change it in any way. At the same time, a player can’t influence or calculate the result too because the hash is encrypted. He receives unhashed code only after the end of a game round.

Example of Provably Fair Checking in a Game

Open a game you want to play. We chose Aztec Magic Deluxe by BGaming. Click on the Provably Fair icon in the upper right corner as shown in the picture below.

You will see an encrypted code (Result fingerprint) that you will use for verifying the randomization of an outcome later. At the same time, the system automatically generates a random string (Secret). 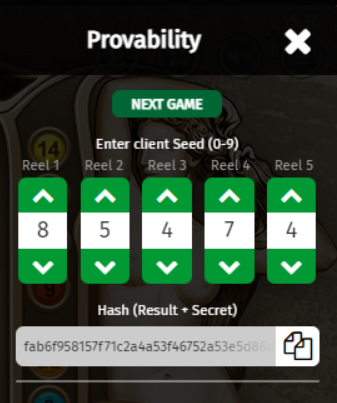 Start the game and play.

Now, you can use the Provably Fair checker to validate the transparency of a game. The system adds your client seed to the Result fingerprint and passes Result + Secret and unhashed final result to you. At this point, you can see that the outcome is genuine.

The Provably Fair system has a lot in common with traditional Random Number Generation. The core of using RNG in games is that it generates more than one result. It ensures that a final outcome is unpredictable for a player, and a casino can’t change it as well.

Before a game release, providers need to get approval from respectful testing laboratories (eCOGRA, GLI, etc.) that will confirm that their games are RNG-verified.

The primary difference between the Provably Fair system and conventional RNG is that in the first case, a player can check the game transparency on his own. With the RNG, a player doesn’t have this option. That’s what makes Provably Fair casino games stand out.

How to Use Provably Fair System at Mirax Casino

In our Mirax casino, Australian players will find a myriad of Provably Fair bitcoin games to any liking. Just find a title you want to play and follow our guide. Enjoy the gameplay knowing that outcomes are unaffected by third parties. Moreover, we offer many stunning bonuses in bitcoin for fair games.

What Games Can Be Checked by the Provably Fair System

At our Mirax casino, we offer tons of feature-rich Provably Fair pokies and table games to any taste.

The brilliance of Provably Fair pokie machines is that the randomization algorithm is applied to pokie reels. By the end of each round, a player can verify whether an unhashed spin result matches the fingerprint given to him before the game starts. At Mirax, you will find a diversity of BTC pokies with the Provably Fair algorithm.

Provably Fair Poker is a true star among gamers in Australia. By comparing the Result+Hash seed with the final script, you can be sure that card shuffling is transparent. Mirax players have dozens of Provably Fair bitcoin Poker games to choose from: Casino Hold’em, Caribbean Poker, Oasis Poker, and many more. By playing Provably Fair Roulette, you can be 100% confident that the wheel is not rigged. The way the ball drops in a pocket is always random. Mirax casino is a paradise for all fans of fair Roulette games with cryptocurrencies. Choose European, French, or American Roulette versions and rush to big wins. 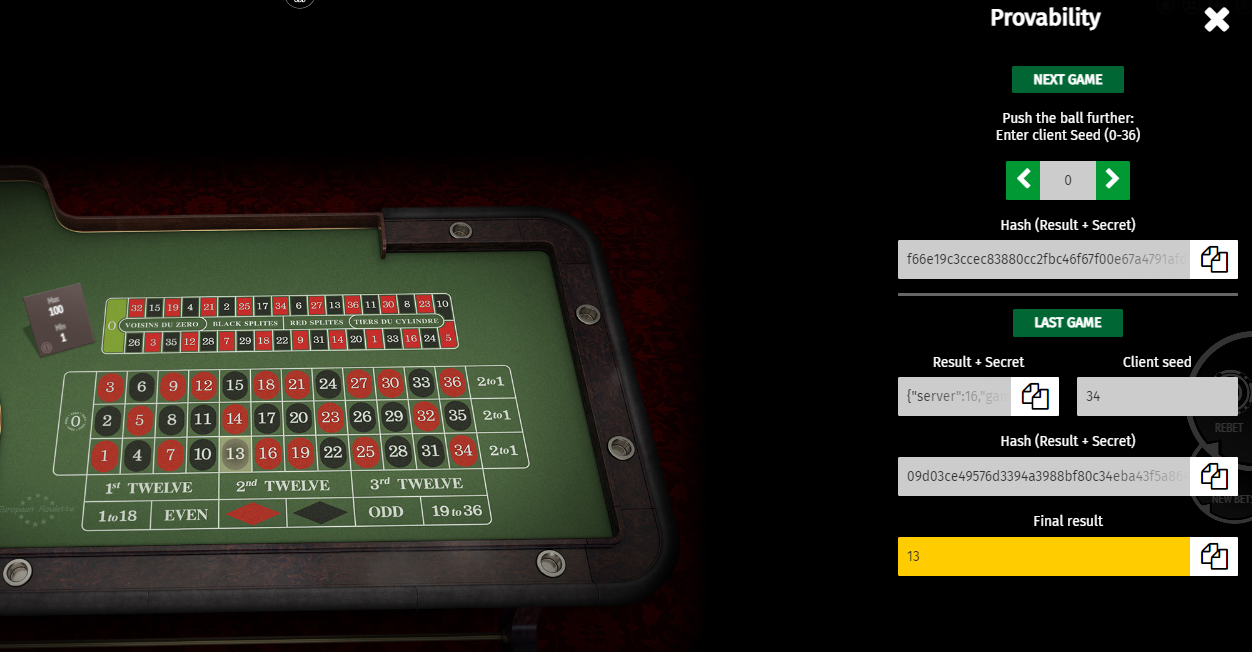 BTC Blackjack is one of the favorites in our Provably Fair casino games collection. A player can check his input on the game by comparing the shuffled deck (Result+Secret) to the final result. Another advantage of Provably Fair Blackjack on BTC is a high RTP of over 99%.

Dice is another hit among BTC Provably Fair games at Mirax. The cryptographic algorithm ensures that the way dice rolls come with a 100% random result. You can use the Provably Fair verifier in dice games in the same manner as in card games.

The Provably Fair crypto casino Mirax stands for transparent gambling. Play hundreds of top-notch pokies and table games with a fair checker. We guarantee a 100% genuine result of every spin. Use BTC bonuses to boost your lucky chances.

Can I beat the Provably Fair algorithm?

No. Nobody can manipulate the Provably Fair algorithm because it is based on cryptographic hashing.

What is a Provably Fair bitcoin casino?

It is an online bitcoin casino that offers games with the Provably Fair system. Mirax casino is just the case.

Read our in-detail guide. It explains how to verify the pureness of results in pokies and table games using the Provably Fair system.

Can players or casino operators hack the Provably Fair system?

No. It is impossible to hack the Provably Fair checker. The algorithm is based on 3 unbeaten components: a client seed, a server seed, and a cryptographic nonce.

What is the best bitcoin casino for Provably Fair gambling?

Mirax is the best BTC casino for Provably Fair gambling in Australia. We offer a wide range of fair games for playing with AUD and cryptocurrencies.